Donald J Trump has given his marching orders to the paramilitary troops who represent the Immigration Customs Enforcement Agency commonly known as ICE.

The agents are in maximum slave-catching mode and the quarry is undocumented workers and immigrants. The first sign that something very horrible is coming was the passing of a Sanctuary City bill in the Texas state legislature or more properly said;  the anti-Sanctuary City Bill (SB 4)  which not only de-funds a city which provides a safe haven for undocumented humyn beings, it punishes any law enforcement officer or state official who fails to get in line with the new policy. Just this weekend (Feb 11-12, 2017) ICE conducted raids in Austin, Texas one of the most immigrant-friendly the cities in the Lone Star State.

The reason I say RUN is this:  not only does Texas maintain the largest prison system in the United States, last year Texas became the poster child for inhumane and torturous conditions inside facilities used to house immigrant detainees!  There was a full-fledged rebellion at Willacy County Correctional Facility because the conditions were atrocious!! The Department of Justice stated it would discontinue the use of private prison corporations like GEO, CCA or Wackenhut because these private prisons have established a pattern of abuse and corruption – hello Sean Spicer!

So here comes the White House Press Secretary Sean Spicer and he is going to lie!

“Oh gosh no! We aren’t hunting humyn beings down like dogs and throwing them in cages we only want the criminals.”  Deceptions and lies! 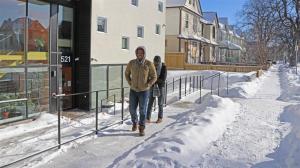 The reality is Somali refugees are braving sub-zero temperatures to cross into Canada because they are AFRAID.

And rightfully so! Donald Trump is surrounded by white nationalists and they have made up their minds that the best way to ‘make America great again’  is to initiate and implement a covert ethnic cleansing campaign and the first sacrificial lambs on the list are: a) undocumented workers and b) Muslims.

The state of Texas is the ‘ tip of the spear’ in this ultra-racist and bigoted domestic policy. Take off the Rose Colored Glasses folks;  all the ‘soft talking’ and made up facts cannot counter the truth. The United States incarcerates more of its citizens than any country in the world. Fact! Private prison corporations like GEO,  CCA,  and Wackenhut are doing the “happy dance” because Trump has revitalized the art of torture.

Once again I say that if you are truly committed to the struggle against imperialism then you will silently and covertly provide safety, shelter, food, water, and clothing for our undocumented sisters and brothers.

I was not alive during the time of Adolf Hitler and Nazi Germany but more and more Trump’s America is feeling strange to me. I don’t want to be here. I will gladly give up my citizenship in order to flee a nation which has branded me an enemy of the state. Unwanted and unloved.

But I can’t flee I am trapped!!

So, therefore I will fight! I will fight this oppressive regime with every ounce of my being. What will you do?

Will you sit by quietly while the paramilitary shock troops visit a city near you and hunt your friends down like dogs?? The revolution won’t be televised.

Dare to struggle dare to win all power to the people!